The British pound and the FTSE 100 were little changed after the relatively mixed economic and earnings data from the UK. According to the British Retail Consortium (BRC), the volume of retail sales declined by 0.2% in October. Meanwhile, data by Kantar showed that grocery sales declined by 1.9% in the 12 weeks to October. Tesco was the only grocer that did well in this period as its sales rose by 0.3%. Meanwhile, the rising home prices led to strong quarterly results by Persimmon and Vistry. Associated British Foods released strong results even as it warned about the rising costs of doing business.

Cryptocurrency prices maintained a bullish trend as demand for the coins kept rising. Bitcoin rose to more than $68,000 while Ethereum rose to more than $4,800. In total, the market capitalization of all cryptocurrencies tracked by CoinMarketCap jumped to more than $3 trillion for the first time. Other coins that did well are Cardano, Solana, and Basic Attention Token. Analysts believe that this bullish trend could continue in the next few months considering that regulatory risks have been abated.

The EURUSD pair moved sideways after Germany published weaker-than-expected trade numbers. According to the statistics office, the country’s total exports declined by 0.7% in September. This decline was worse than the expected increase of 0.5%. Imports also increased by about 0.1% while the trade surplus widened to 13.2 billion euros. Later today, the pair will react to speeches by Jerome Powell and Christine Lagarde.

The EURUSD price wavered ahead of key speeches by Jerome Powell and Christine Lagarde. It is trading at 1.1590, which was slightly below this week’s high of 1.1605. The pair is between the 38.2% and 50% Fibonacci retracement levels on the hourly chart. At the same time, it has formed an ascending channel that is shown in pink. It also remained above the 25-day moving average. Therefore, the pair will likely bounce back as bulls target the upper side of the channel at 1.1610. 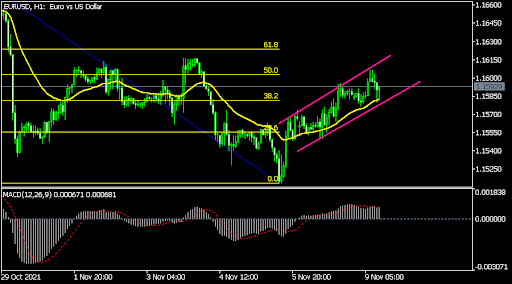 The BTCUSD price surged to an all-time on Tuesday. The pair is trading at 68,138, which is slightly below the key resistance of 70,000. It has managed to move above the key resistance at 66,900, which was the previous all-time high. It is also being supported by the 50-day moving average. Therefore, the pair will likely keep rising as bulls target the resistance at 70,000. 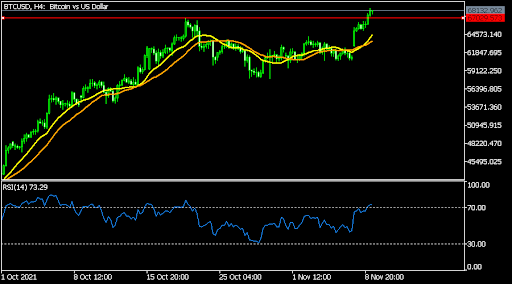 The USDJPY pair maintained a strong bearish trend after the relative strong Japanese overtime pay and spending data. The pair declined to a low of 112.73, which was the lowest level in months. On the hourly chart, the pair formed a descending channel that is shown in pink. It has also moved below the short and longer-term moving averages. Therefore, the pair will likely continue the bearish trend in the near term. 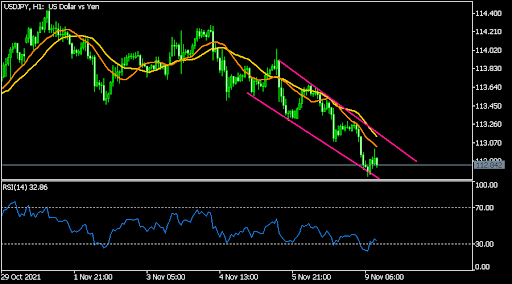 General Risk Warning for FX & CFD Trading. FX & CFDs are leveraged products. Trading in FX & CFDs related to foreign exchange, commodities, financial indices and other underlying variables, carry a high level of risk and can result in the loss of all of your investment. As such, FX & CFDs may not be appropriate for all investors. You should not invest money that you cannot afford to lose. Before deciding to trade, you should become aware of all the risks associated with FX & CFD trading, and seek advice from an independent and suitably licensed financial advisor. Under no circumstances shall we have any liability to any person or entity for (a) any loss or damage in whole or part caused by, resulting from, or relating to any transactions related to FX or CFDs or (b) any direct, indirect, special, consequential or incidental damages whatsoever.