Ethereum’s recent gains, with it reaching an all-time high this week, have led to many investors believing that an “Altseason” is upon us – and many altcoins could stand to generate huge returns for investors.

What is Altcoin Season?

“Altcoin season,” or “Alt Season,” refers to the encompassing idea of profit rotation from Bitcoin into “Altcoins” which makes them rally in their BTC and USD pairings. Ethereum is always the first to drive Altseason, thus the recent rally in ETH to all-time highs of $3,454 and also the decline in BTC dominance to the lowest value of 46.2% since August 2018 may signal an upcoming ‘Altseason’.

However, to fully harness the benefits of the Altseason, it is essential for investors to bear in mind that the markets are cyclical, and understanding how each phase works is very important.

The accumulation stage is a crucial market phase that occurs after the market has reached bottom lows and smart investors begin to buy the dip. At this phase, prices are very low, and general market sentiment is still bearish as the media predict doom, and those who have held on for long may be tempted to sell their holdings. Then comes a sudden lift in which buyers appear on the scene, the overall market sentiment begins to switch from negative to neutral.

ZAP Technical Analysis: After Reaching Lows of $0.10, the Overall Set Up Favors Rebound 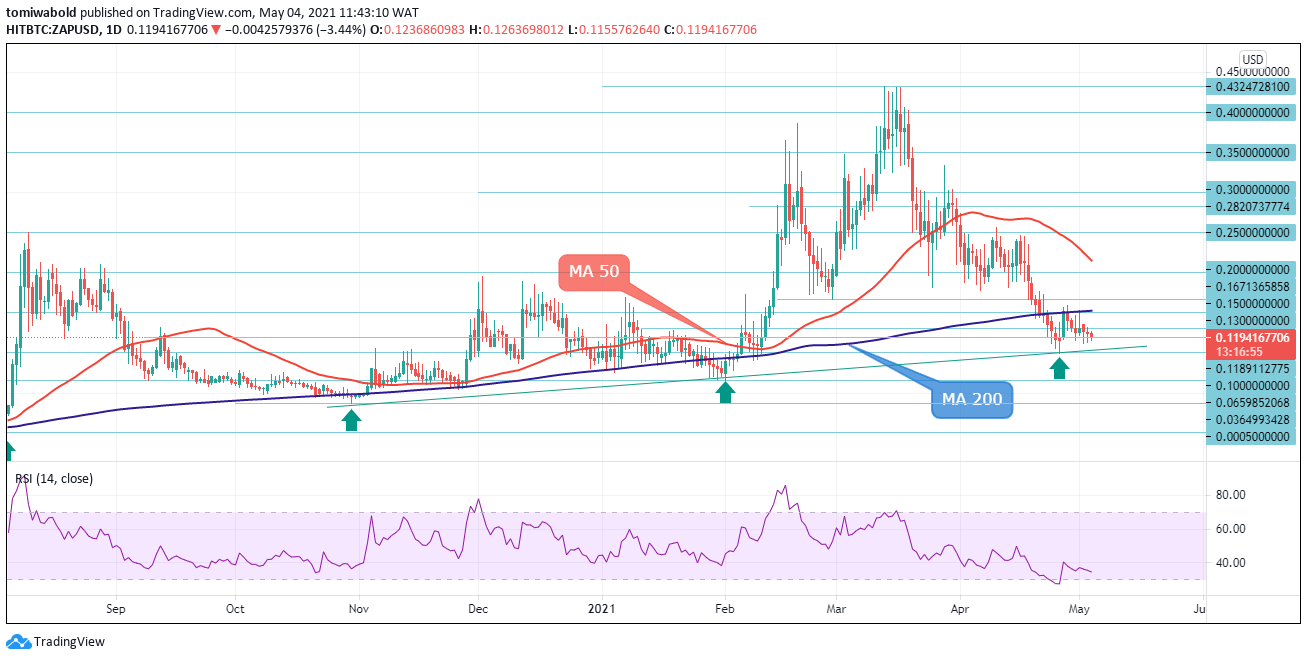 ZAP/USD optimism was higher after the crypto market became upbeat about gains in the decentralized oracle tokens despite the correction at yearly highs of $0.4324. ZAP’s rebound at $0.10 resumed in reaction to the Altcoin market’s increased dominance on Apr. 26 while reaching a medium-term high of $0.15 on Apr. 28. The token is set to mirror other DeFi token’s 200% rebound from their lows.

The break of $0.15 medium-term resistance and daily moving average (MA 200) should confirm short-term bottoming while support from the $0.1189 confluence zone should also affirm near-term bullishness. Overall, ZAP has bounced off the $0.10 mark. It is now trading in the $0.10 to $0.15 range, indicating that the token has reached a bottom.

Chainlink Technical Analysis: Tentative Signs of Retracement, As Chances of a Double Top Builds Beyond $43 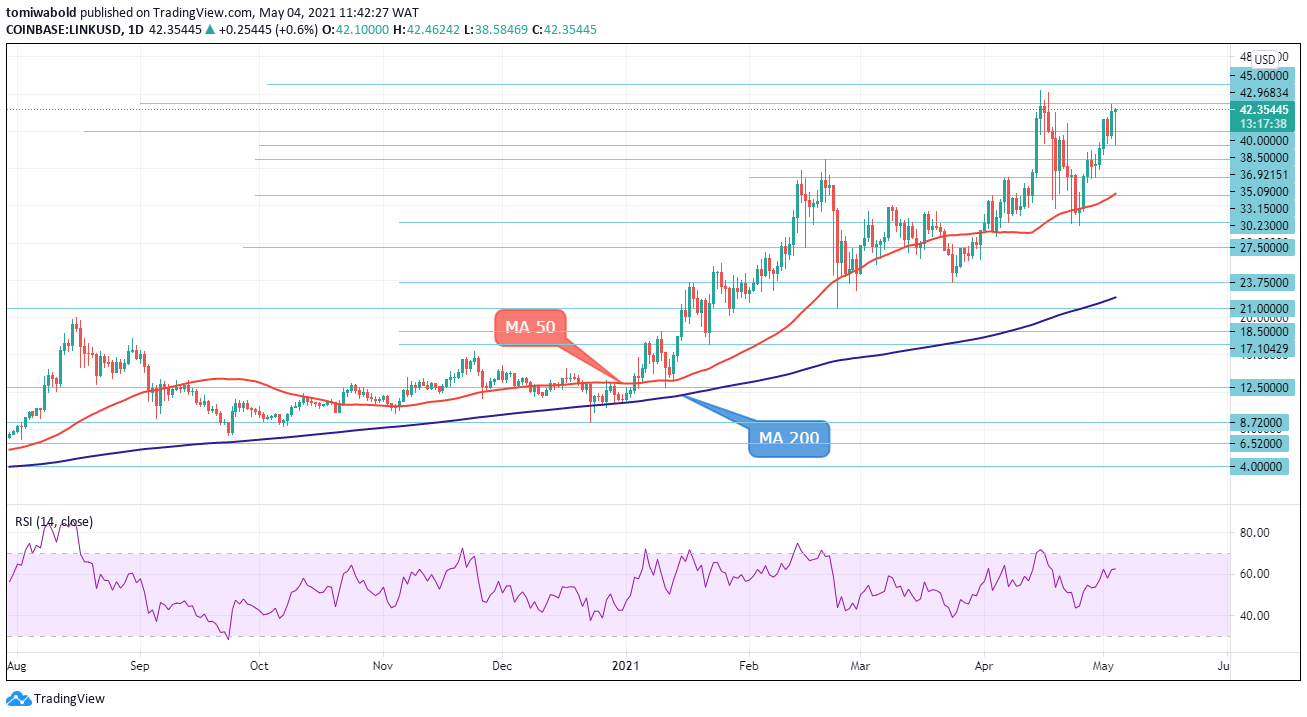 The LINK/USD upside run initially held close to recent peak levels near $43 levels in the prior day but retraced to an intraday low of $38.58. Although this correction was very limited given the magnitude of its upside push, the tentative signs indicate a risk of running into higher resistance at the all-time high of $44.40 for a double top.

On the technical side, markets may gradually look for a top around $44.40 and pull back towards the key support zone at the $33.15 level near the moving average (MA 50) structure. A (temporary) easing in the run, on LINK in theory should give bears some relief. Overall, further gains could still be on the cards as long as $38.50 minor support holds. 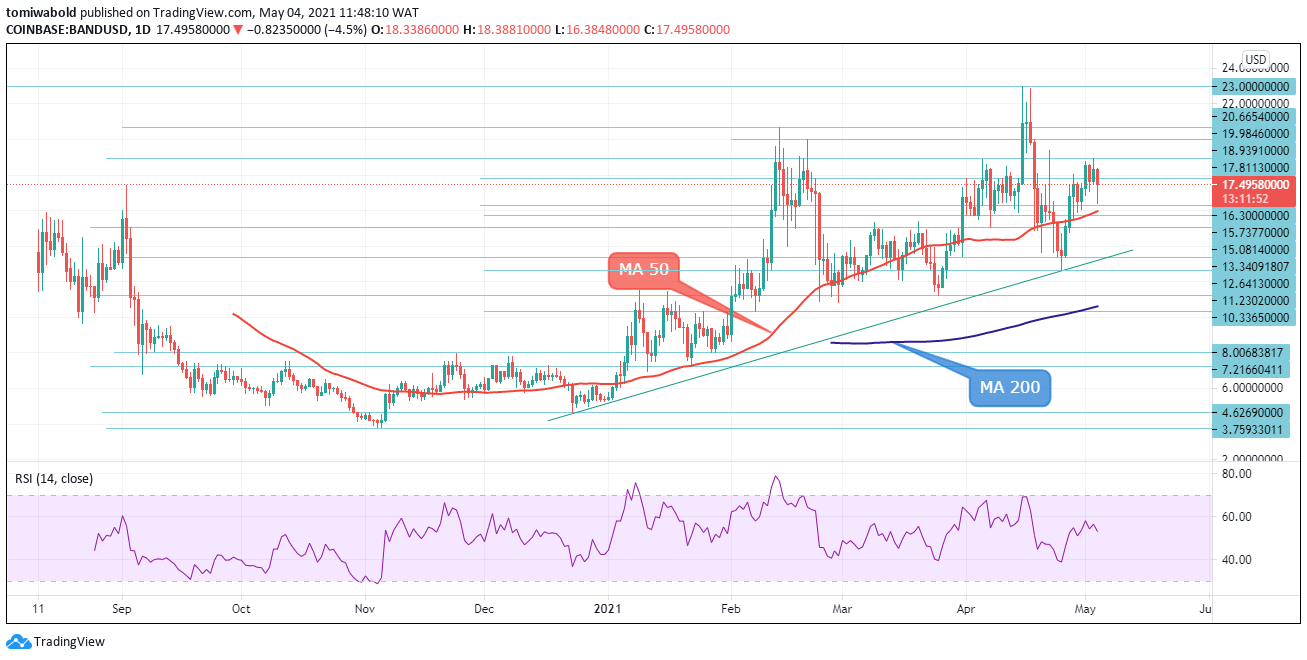 BAND/USD fell in early Tuesday’s trading following general declines in the cryptomarket. Fresh weakness retraced Monday’s gains while pressuring the $16.38 support which guards the key MA 50 support at $15.57, loss of which would add to reversal signals and risk deeper fall.

The resistance zone between $19.39 to $23 continues to weigh with a downward daily RSI approaching the mid 50 reading. If the bears take the market below the MA 50 support, the move could meet $12.64 support before meeting the $11.23 level. Even lower, the 200-day SMA could act as a support line at $10.61, shifting the market to bearish.

Most crypto assets have been through the accumulation phase, for instance, Chainlink after reaching highs of $20 in August 2020, entered a downside move with the market hitting bottom lows of $7.31 a consolidation thereof occurred and LINK resumed the uptrend in January 2021. ZAP, a decentralized oracle platform that serves as an alternative to Chainlink could be said to be in accumulation.

After reaching bottom lows of $0.10, ZAP is presently consolidating its rebound which presents a viable opportunity for investors to buy the dip.

The information has been prepared for information purposes only. The document is not intended as personalized investment advice and does not constitute a recommendation to buy, sell or hold investments described herein. This information contained herein is derived from sources we believe to be reliable, but of which we have not independently verified. FXInstructor LLC assumes no responsibilities for errors, inaccuracies or omissions in these materials, nor shall it be liable for damages arising out of any person’s reliance upon this information. FXInstructor LLC does not warrant the accuracy or completeness of the information, text, graphics, links or other items contained within these materials. FXInstructor LLC shall not be liable for any indirect, incidental, or consequential damages including without limitation losses, lost revenues or lost profits that may result from these materials. Opinions and estimates constitute our judgment and are subject to change without notice. Past performance is not indicative of future results